Lumber is a construction staple. When it comes to building infrastructure on a grand scale or even an individual house, wood is a commodity that is required. Like many other raw materials, the price of lumber is a function of supply and demand. At the same time, macroeconomic factors can influence the price of wood. When interest rates fall, mortgage rates decline, and demand for new homes tends to rise thus increasing the requirements for lumber. Poor economic conditions tend to lead to less demand for wood as activity tends to slow. Therefore, the price of lumber is often an excellent indicator when it comes to understanding periods of economic expansion or contraction. I view the price of lumber as a bellwether indicator when it comes to the economic conditions in the United States and around the world.

The price of lumber has been in a bull market since September 2015 when the price bottomed at $214.40 per 1,000 board feet and rose to highs of $414.60 in April 2017, the highest price since March 2005. Over recent weeks, the price of lumber has declined to under the $370 level. Meanwhile, other industrial commodities have been posting gains.

Industrial commodities have been moving higher

In May, June, and July the prices of some of the most significant industrial commodities that are staple building blocks for infrastructure hit bottom, reversed and moved higher. The reason for the reversal of fortune could be two-fold. First, the U.S. dollar has been falling steadily since reaching the highest level since 2002 at the start of this year. 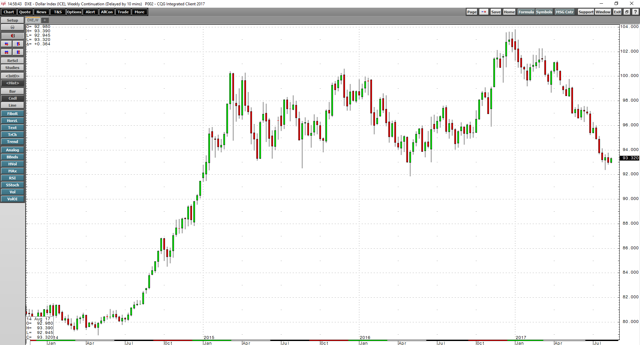 The weekly chart of the dollar index shows that it has declined from 103.815 on the first trading day of 2017 to lows of 92.39 on August 2, a fall of 11%. While the greenback index has recovered over the past two weeks, it remains less than 2.00 above the recent lows as of the close of business on August 14. There is a strong inverse historical relationship between the dollar and commodities prices, and the lower dollar has supported gains in the prices of industrial commodities.

Second, and perhaps more importantly, it has become apparent that China has been in the market buying and stockpiling raw materials over recent weeks. The Chinese government will convene in their party Congress in October, and it is possible that stimulating growth under the “new normal” has led the nation to start buying commodities to build inventories when it comes to the basic construction staples required to build infrastructure in the country. Moreover, the tension between the United States and North Korea could be causing the Chinese to buy now rather than waiting as potential problems in the region could lead to complications when it comes to major logistical routes in the Korean Peninsula and throughout Asia.

Meanwhile, we have seen price appreciation in some of the bellwether commodities prices over recent weeks.

Copper broke out to the upside, and other base metals followed

The price of September copper futures have appreciated from lows of $2.4850 per pound on May 8 and have broken out to the upside above the $2.90 level at the end of July. 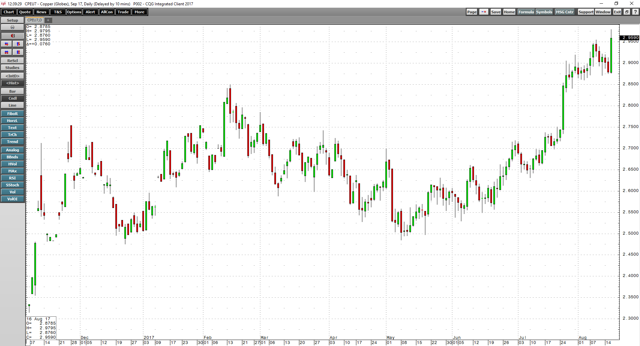 As the daily chart of COMEX copper futures illustrates, the red metal reached its most recent peak at $2.9795 on August 16. Meanwhile, the prices of other base metals have moved to the upside since the end of June. Three month aluminum forwards on the London Metals Exchange appreciated from $1914 per ton on the final trading day of the second quarter to $2050 as of August 15. Nickel moved from $9330 per ton to $10,415 and lead from $2290 to $2388 over the same period. Zinc rallied from $2752 at the end of Q2 to $2955 and tin has climbed from $19,925 per ton to $20,225 over the period. All of the nonferrous metals have moved to the upside over recent weeks as the Chinese have been on the bid, the dollar has moved lower, and the global economic landscape has supported gains. Meanwhile, nonferrous metals are not the only industrial commodities that have appreciated over recent weeks.

Iron ore is the primary ingredient in the production of steel, and the price has taken off to the upside since the middle of June. 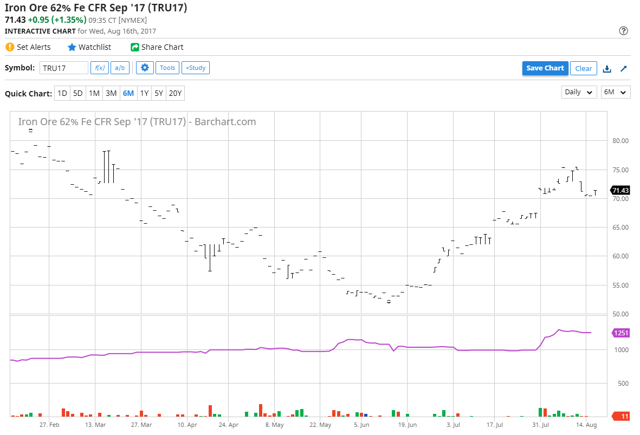 Energy posted gains, and the BDI has exploded 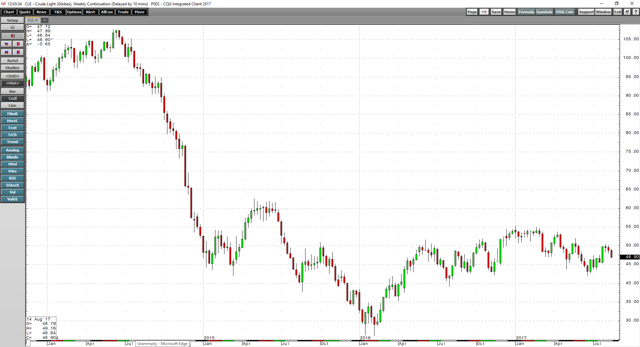 As the weekly chart of NYMEX crude oil futures highlights, the price found a bottom at $42.05 per barrel and rallied to above the $50 level once again at the end of July and beginning of August. While oil has slipped from those highs, it was trading at $46.90 per barrel on August 16, more than $4.50 or more than 13% above its June lows.

At the same time, a key shipping index has moved aggressively higher over recent weeks in a sign that demand for dry bulk industrial commodities is rising.

The chart of the Baltic Dry Index shows that the average cost of shipping cry bulk raw materials increased from 820 on July 10 to 1169, an increase of over 42.6% in fewer than five weeks.

Lumber has stalled, for now

While a wide section of industrial commodities has experienced rallies over recent weeks, the price of lumber futures has gone the other way. Lumber is a critical input in the construction process, and while the price has not been following other staples in the sector higher, it has been in a bull market trading pattern since way back in September 2015. 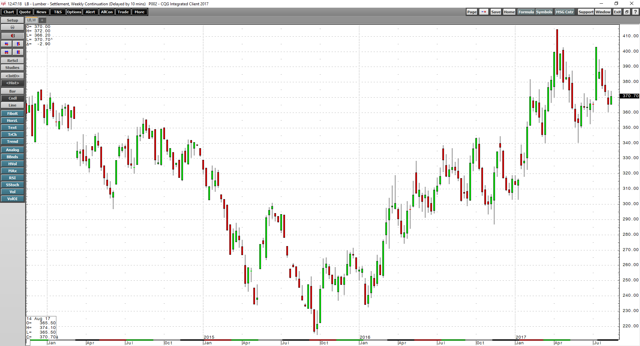 As the weekly chart of lumber futures highlights, the price of wood has made higher highs and higher lows since late 2015. In April, nearby futures hit $414.60 per 1,000 board feet which was the highest price since 2005. Lumber made a lower high on the nearby futures contract in July at just over the $400 level and had since been correcting to the downside. September lumber futures were trading at the $370 level on August 16, and while they were around $45 below the April highs, the price of wood remains over $40 per 1,000 board feet higher than where it was trading last year at this time.

Lumber has been bucking the trend in the industrial commodities sector over recent weeks. Commodities tend to be highly volatile assets, and each raw material has different supply and demand fundamentals. I am keeping a close eye on the price of lumber these days, as it is a key cog in the construction business. Lumber has benefited from the explosion in new home building in the United States since 2015, and I believe that the price will once again head higher and to a new peak over the $414.60 level on the weekly chart as the rest of the commodities required for infrastructure building continue to display price strength.

Me WordPress Theme by themehall.com